Even before Severina was born, I was a big fan of books for children. While I was pregnant, we read to her in my belly, and we’ve been reading to her ever since she was born — regardless of the fact that she’s only now even starting to notice the pages in earnest. I believe that reading to children is the cornerstone of kindling their love of literature, and that reading is not only good for its own sake, but for fostering empathy and giving kids a quiet, personal activity for when they need alone time.

To that end, I’ve played a little fast and loose with my definition of “comic” here, since picture books are a sequential art in and of themselves — and I like them, besides. I have tried to stick with authors who also write “comics” at the very least, so that this list can act as an introduction to creators whom little readers can revisit later in life. This list will be for children from birth through early elementary school; I’ll do middle reader and young adult comics lists later on. I would emphasize that even if you think your child isn’t getting anything out of reading, they’re learning and retaining more than you think! 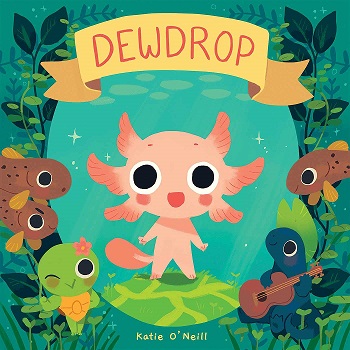 I’m a huge fan of Katie O’Neill’s work, ever since the print version of her comic Princess Princess Ever After came out. I even had the privilege of meeting her when she was Stateside for New York Comic Con a couple years ago; she was kind enough to do a signing at Comicopia. She’s extremely sweet, exactly the kind of person you would imagine writes and illustrates excellent material for kids — which she does! Dewdrop is her newest book, which follows a little axolotl as he encourages his friends, all of whom are lending their unique talents to the annual sports festival, to be the best they can be. The only text in the book is word bubbles, giving the full comic experience to even the youngest of audiences. Katie’s lineless artwork is bright and composed of simple shapes. One of my favorite aspects of her work is the focus on kindness, both toward other people and toward the planet. There’s more information at the back of this book about the animal characters, providing a little ecology lesson along with a gentle tale about helping your friends recognize their talents. 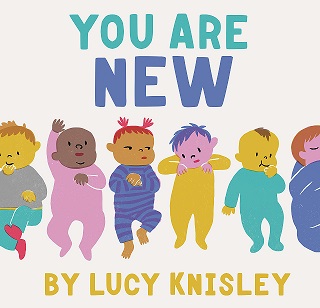 You Are New, by Lucy Knisley — published by Chronicle Books

I’ve mentioned Lucy Knisley’s latest picture book in a past iteration of my monthly favorites, but it bears repeating. Like Katie O’Neill, Knisley opts to forego lines in favor of bright, bold shapes for little eyes to take in. This book focuses on all the situations in which we are new: new as babies, new as older siblings, new to a school, new when we recreate ourselves in our imaginations, and so on. It’s a lovely early introduction to change, and how exciting it can be when we look at it as an experience of newness. I think that this would be a very good read for a child who is struggling with change — and given the current state of the world, I know a lot of tiny people are having a rough go of it. Change is a common theme in Knisley’s work, much of which draws from her own lived experiences.

¡Vamos! Let’s Go to the Market, written and illustrated by Raúl the Third with colors by Elaine Bay — published by Versify

This book has been favorably compared to Richard Scarry’s Busytown books, which is fair; however, I want to make it clear that ¡Vamos! Let’s Go to the Market and its sequel ¡Vamos! Let’s Go Eat are in a league of their own. Raúl and his partner, colorist Elaine Bay, bring a thriving Mexican market alive for readers, seamlessly weaving in Spanish words and phrases as Little Lobo and his doggy companion Bernabé make deliveries for various market shops. There are both word bubbles and story text, making this a comic/picture book hybrid. Raúl’s dedication to Mexican iconography and obvious familiarity with the comings and goings of the mercado give the bustling scene texture and depth. His artwork, which has graced everything from beer cans to gallery walls, is a gorgeous cartoon-meets-desert-fever-dream, and it’s exciting that even the youngest of readers can enjoy it.

The Princess and the Pony, by Kate Beaton — published by Arthur A. Levine Books

Years before Kate Beaton had a baby of her own, she made a couple of excellent picture books which I have enthusiastically gifted to friends and family over and over again. The Princess and the Pony is the story of Princess Pinecone, a warrior princess who dreams of acquiring a mighty steed to help her in her conquests. Instead, she receives a chubby, flatulent pony with an absurd face. Hilarity ensues, as it so often does under Beaton’s expert pen. Get your giggles and spark a love of weird little girls (and their weird pets) in fiction.

The Wolves in the Walls, written by Neil Gaiman and illustrated by Dave McKean — published by HarperCollins

I’m pretty sure Neil Gaiman has written every sort of thing possible, and that includes a bevy of books for children. My favorite of them is The Wolves in the Walls, wherein young Lucy tries to warn her family about the wolves living in the walls of their house. They dismiss her claims, all of them reciting that “When the wolves come out of the walls, it’s all over.” Of course, the wolves do come out of the walls, and it is Lucy who must decide to take her home back from the partying canine invaders. It’s a very silly book with Dave McKean’s spooky and wonderful collage artwork. I love the way he draws almost elastic-looking wolves in ink, sleeping in Lucy’s bed and eating Lucy’s mother’s homemade jam out of the jar. This book might not cut it for a child who is easily frightened by confusing or dark imagery, but for the kid with a sophisticated sense of humor, it’s a good bet. 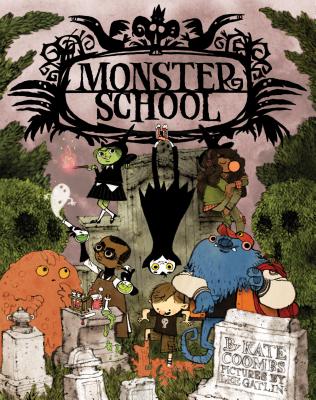 This is one of those (many) circumstances where I bought a children’s book long before I was even considering getting pregnant because I was a fan of one of the people involved in its production. In this case, I follow artist Lee Gatlin, whose spooky and adorable comics first caught my attention many years ago, probably recirculated on Facebook or something. Monster School is an excellent use of Gatlin’s darkly adorable art style, and the poems by Kate Coombs convey a nighttime school experience that many kids would die for — literally, in the case of one sweet little ghost. What’s more, the poems are fun to read, and they utilize many different poetry formats, giving readers lots of rhyme schemes to try out. I read this to Sev recently, and while she probably didn’t understand a lick of it, I was very impressed and believe it will become a family favorite! 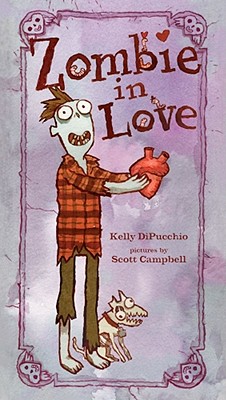 Zombie in Love, written by Kelly DiPucchio and illustrated by Scott Campbell — published by Atheneum Books for Young Readers

I’ve been really impressed by how many high-quality “spooky” children’s books we’ve been able to acquire. This one was a gift, along with its sequel Zombie in Love 2+1, and I instantly recognized artist Scott Campbell from his Great Showdowns illustrations. Campbell’s watercolors expertly accompany the story of Mortimer, a lonely zombie who has been trying desperately to find his true love. He’s tried every piece of advice he can find without luck, until he finally stumbles upon his match at the Halloween ball! The sequel follows Mortimer and his love Mildred as they become new parents to a living human child, with all the ups and downs of parenthood. These are absurdly sweet, funny books with a touch of the macabre to keep things weird, and plenty of zombie jokes hidden in Campbell’s artwork.

Scott Campbell gets two books on this list, but I couldn’t resist another favorite gift — and he’s both writer and illustrator this time. Hug Machine is told from the perspective of a child who is an excellent hugger. He hugs everyone and everything, and is fueled by pizza. This one is a board book, so a great read for little ones who are enthusiastic about demonstrating affection, but haven’t yet mastered not putting books in their mouths!

Manga is actually a challenging ask for very young kids. Most of what gets translated is intended for at least a middle school audience, though Japanese picture books like Everyone Poops have been childhood classics for decades. Chi’s Sweet Home is the one manga I always felt comfortable recommending to families with little kids. It’s a very simple tale of Chi, a little cat who lives with a family and gets into various mundane troubles. Big-eyed Chi is instantly appealing to little ones, and the low-stakes situations make for innocent fun. The manga now comes in large omnibus editions, so this is a tough grab for little hands. But for a family read-along, this is a great pick that will really throw kids into the world of comic books.

Every day, I find more books that I want to add to Severina’s library. My mother-in-law likes to joke about how she had to read The Poky Little Puppy over and over again to my husband, but we are very lucky to be living in a time with an overwhelming wealth of excellent children’s literature to suit all tastes. I can’t overstate how important I think it is for adults to read to children, and I hope that even in the chaos of quarantine, those of us who share our homes with kids are granted some time to have that experience.

Next week, we’ll be talking comics for older elementary and middle school aged children. This is a HUGE market in graphic novels, so it should be fun to try and come up with some hidden goodies buried among the mountain of bestsellers.

Until then, happy reading!

3 thoughts on “Comics Lockdown: Reading With Little Ones”