Every month, I get the itch to write this segment about halfway through, thus defeating the point of having a monthly round-up! I get too excited to talk about what I’ve just read, and I read a lot of good stuff in April.
Actually, a lot of stuff in general happened in April. I turned 29 on the 4th, so here’s to the last year of my 20s! My husband and I are in the midst of apartment hunting, which is always chaotic, especially here in the Boston area. And Anime Boston was last weekend! Even though I don’t technically work at Comicopia anymore, I helped with the ordering and was there on the floor from set up on Thursday to break down on Sunday. It was a really great show, and I’m glad I was able to be a part of it. Selling at conventions is my favorite kind of retail, because everyone is just so excited to be there and see what you’ve got and talk to you about it. And all the con-goers are so creative — I saw so many excellent costumes! Oh, and my very first post for Anime Feminist went up this week, as well: a spotlight on amazing artist and mangaka Junko Mizuno.
As May approaches, I’m getting ready to head over to the Toronto Comic Arts Festival (TCAF) for the first time, and I’m super excited. Between that and moving, May is going to be intense — but we’re not there yet. For now, I want to reflect on all the good stuff I read in April! And it’s actually all relatively new stuff this month, a sure change for me. 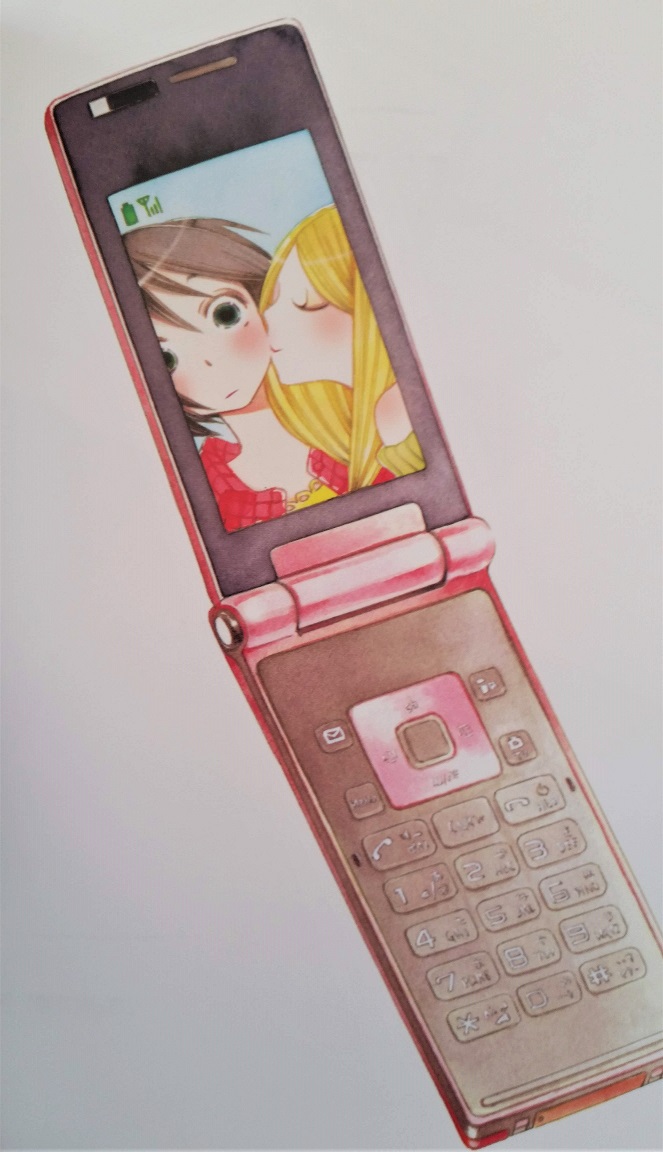 Maiden Railways, by Asumiko Nakamura — published by Denpa
This is the first of Denpa’s offerings that I’ve gotten a chance to read, and it’s the one I was most looking forward to. I love Asumiko Nakamura. Her art is so strange, both adorable and almost uncomfortable with all its sharp angles and long limbs. This volume is an anthology of railway-themed romances. It is simple and straightforward in many ways, but as with all of Nakamura’s work, it sets a very distinct tone, in this case of hope and longing and compassion. It’s a really lovely little collection with some lesbian themes neatly tucked into it with no fuss. Between this and Seven Seas’s upcoming print version of Classmates coming out soon, I am thrilled that more readers have access to Nakamura’s work. 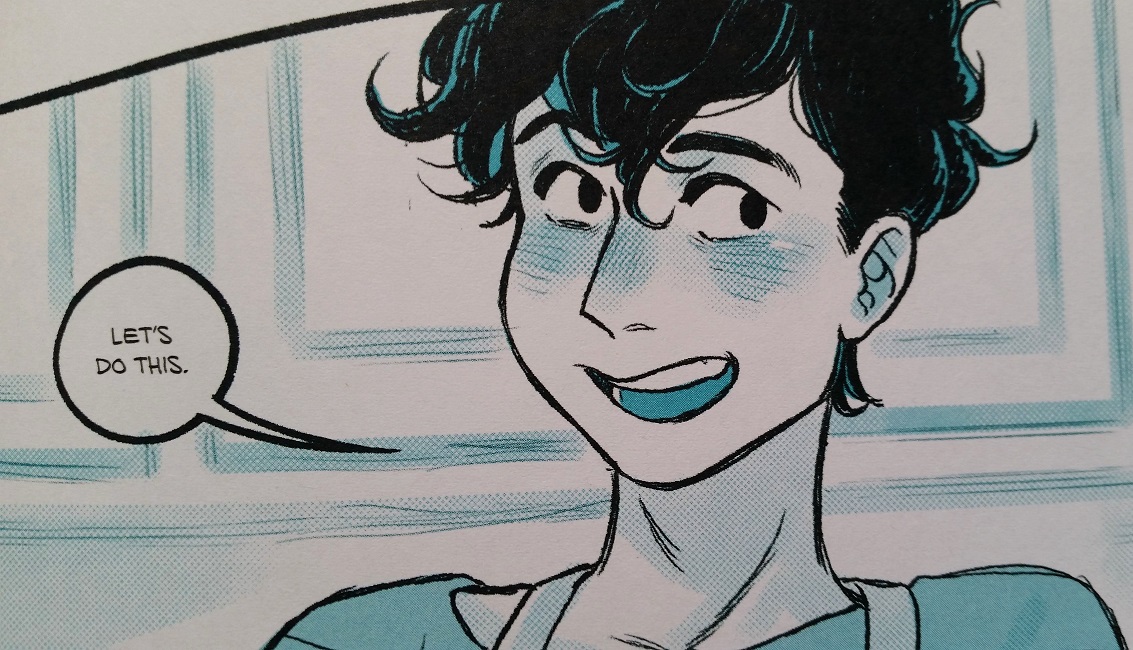 Bloom, by Kevin Panetta and Savanna Ganucheau — published by FirstSecond
I had to wait for this book from the library for months, and I absolutely understand why — it’s absurdly charming. Ari’s dream is to move to the city with his band, but he can’t seem to escape his responsibilities at his family’s bakery. Hector, a culinary school student, has come to town to pack up his deceased grandmother’s home. Ari hires Hector to help in the bakery, in the hopes that by replacing himself, he will leave his parents no room to argue about his leaving home. But over the course of the summer, Ari and Hector grow close, and they have to make some big decisions about where their lives are headed, and whether those lives include each other. This book was so unbearably sweet, and so beautifully illustrated. Savanna Ganucheau does an excellent job of showing everyday examples of sexiness — nothing exploitative, but the little kinds of things that a person appreciates in their partner, like how they look when they’re focused, or how they move when they’re excited. With a cast diverse in both ethnic background and body type, and a strong, happy queer narrative, this is an incredibly delightful read for teens and up. 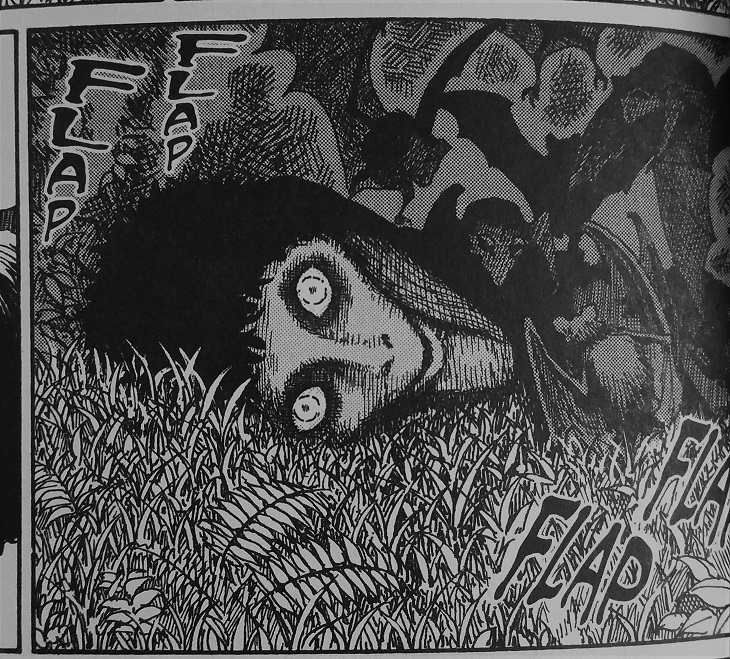 Smashed, by Junji Ito — published by VIZ Media
It’s no secret that I’m a HUGE Junji Ito fan. (That’s part of the reason I’m so excited about TCAF!) I never know what to expect with each new anthology: Will I be scared? Will I laugh? Will I feel like I just watched a particularly poignant episode of The Twilight Zone? For me, this collection had a lot of humor in it, and that is perhaps one of my favorite things about Ito’s work. There is a very fine line between comedy and horror, and no one loves to hop back and forth across that line as much as Ito. I think my favorites in this collection were “Bloodsucking Darkness” (because I love bats), “Soichi’s Beloved Pet” (because I love cats), and “Library Vision” (because I love books). The linked Soichi stories never fail to be silly fun, and as usual Ito’s artwork throughout the whole anthology is gorgeous and detailed. Truly, he is a master of horror, and all other kinds of base human emotions. 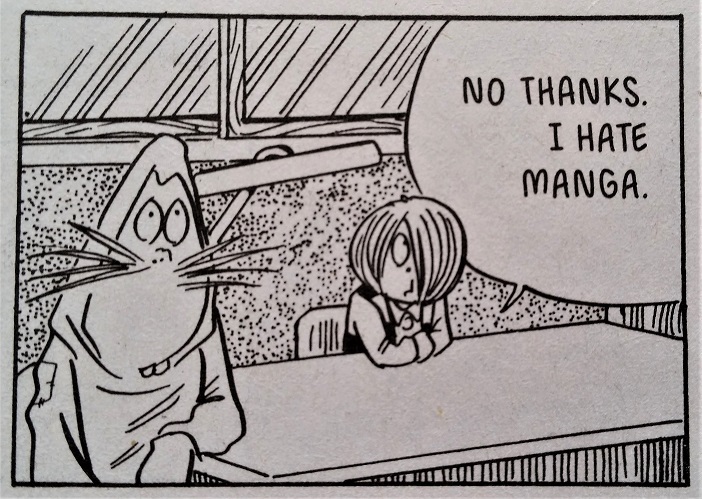 Kitaro’s Yokai Battles, by Shigeru Mizuki — published by Drawn & Quarterly
It’s been so long since there was another installment of Kitaro, and I was thrilled when I was alerted to this making its way into my pull at Comicopia. Who on this earth doesn’t love adorable, weird, childish monsters with potty humor? Only boring people, that’s who! In this collection, I was particularly fond of the “Oboro Guruma” chapter, in which Shigeru Mizuki has inserted himself as a major character, plagued by yokai who are taking over his home as their base of operations. As usual, Mizuki’s cartoony characters sit atop his lush and gorgeous backgrounds seamlessly, and the oft-times odd solutions to yokai-related problems harken back to simpler times and simpler story-telling mechanics. With each volume comes another installment of translator Zack Davisson’s “History of Kitaro,” which really appeals to my interest in both general world history and manga history specifically. A fun read suitable for just about anyone who appreciates a little dark whimsy in their life.
That’s going to do it for this month! I made the conscious decision not to include the sixth volume of Tokyo Tarareba Girls this time around, even though it’s one of my absolute favorite series, because I’ve already written about it in the past, and I anticipate I will talk at great length about it in many forms in the future. I thought I’d spare you all, haha.
I already have a huge pile of comics waiting to be read (don’t I always?), so hopefully I’ll have a nice round-up for May, as well. Happy reading!