October is over! Can you believe it — my favorite month zipped by so quickly, just like it does every year. I love Halloween but also always get a little sad when it gets close because that means the spookiest month of the year will soon be done. But no matter, November is also lovely, and the holidays are coming up fast. I do enjoy spending the cold winter months with family — and this year we’ll be inviting a new member come late January or early February, so there’s a lot to look forward to!
This year, I helped to organize and run the Massachusetts Independent Comics Expo, better known as MICE. Because it was my first time helping, and because I was not as mobile as usual, I felt like I did more observing and learning than anything else. But I had a wonderful time, and I was even able to pick up a couple zines on pregnancy and motherhood! I’m slowly chipping away at my goal of writing about what I’m affectionately referring to as “mom comics.”
Other than MICE and Halloween, it’s been business as usual. I read a couple lovely things this month that I want to share with you, both very much in the spirit of the spooky season!

The Wize Wize Beasts of the Wizarding Wizdoms, by Nagabe — published by Seven Seas Entertainment
I actually did a full review of this manga for Comics Beat (along with a review of Cats of the Louvre), but I just wanted to reiterate how much I enjoyed it since I don’t write those reviews in the first person, and these posts on my blog are more about my personal opinions! Wize Wize Beasts is, in a word, great. It is fluffy BL romances set in a magical wizarding world full of humanoid animals. It plays with some BL and romance tropes that aren’t my favorite (like a student-teacher mutual attraction, though it doesn’t get taken too far), but it’s mostly just fun. I keep using the word “indulgent” to describe it, because it’s not pretending to be anything other than pure entertainment. And, as always, Nagabe’s artwork is wonderful — dark and whimsical, with deft character designs. 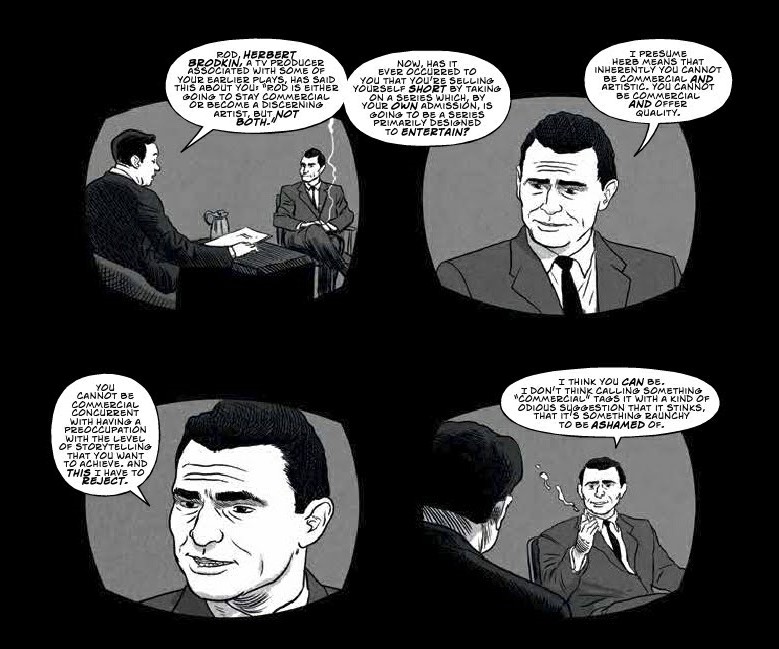 The Twilight Man: Rod Serling and the Birth of Television, by Koren Shadmi — published by Life Drawn (Humanoids)
Oh, Rod Serling. I had been looking forward to reading this advanced copy I had for a while, and I finally just went for it. No regrets. I’m a huge fan of The Twilight Zone and of Rod Serling as a writer and a person, so this biographical comic was always going to be my catnip. It is thoroughly and lovingly researched, and follows Serling from his days serving in World War II all the way through post-Twilight Zone and to his all-too-early death. Koren Shadmi chose to depict the entire book in black and white/grayscale, which I really appreciate. As a manga reader, I often prefer black and white comics because I like to see the use of texture and shading really pop (which is possible in color comics, of course, but less common). In this case, it also lends that old-TV look and feel, giving us the Rod Serling we all recognize from our small screen. I also love the way Shadmi used the framing of The Twilight Zone to pull a bit of a twist on the reader — but I don’t want to give anything away! Definitely give it a read if you’re interested in the show, the man, or in the television industry in the 50s and 60s. There’s a lot of really fascinating information about how writers, producers, and studios operated at the time that I think most people wouldn’t know much about otherwise — and a lot of conversation about commercialism, appealing to the “lowest common denominator” of an audience, and being subject to the whims of the censors.
And that’s October’s recommendations! Just two months left this year, and I’m way behind on my Goodreads reading challenge, which isn’t too much of a surprise. We’ll see if I’m able to make it to 250 books (an ambitious goal to be sure) by the end of December. I definitely have some really interesting manga in my to-read pile, so I’m looking forward to having more to share by the end of November. Until then, happy reading!