Toward the end of May I began to lose steam on writing, partially because of mom duties, but chiefly because of current events — namely, the murder of George Floyd and the subsequent protests. Between the fight for racial justice, the extremely blatant displays of police brutality, and the ever-looming specter of COVID-19, there were so many things going on in the world that were so much more important than my opinions on comic books. I needed to step back for a little while so that I could more actively engage with what was happening.
To help hold myself accountable to continuing anti-racism work, I will be starting the Black Creator Spotlight series in July, with the intention of featuring a new Black comics creator once a month. As always, I have a lot of lofty goals for this blog that may be upended by motherhood, but this is important to me. I hope it will inspire readers to branch out in their comic book choices. While I continue to search for ways to be helpful, this is one way I can use my skills to uplift Black artists. I also intend on continuing my Comics Lockdown series, as it seems that we’ll be in COVID hell for a while longer, at least here in the US. I’m working on being better about scheduling my posts regularly so that I can balance all this new content I want to bring to the site.
Needless to say, since this is a two-month favorites post, there are a lot of comics on the list! And as June is Pride month, a lot of them are queer or queer-adjacent. That wasn’t really intentional, since I try to keep up with new and upcoming releases and queer content is what publishers have been putting out. But it’s a happy coincidence, and I hope that Pride helped to reinvigorate and inspire the community to keep striving for positive change for all people in all walks of life. 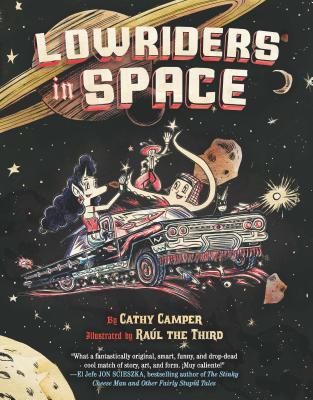 Lowriders in Space — by Cathy Camper & Raúl the Third, published by Chronicle Books
The Lowriders books were something I had intended to read for a long time. Raúl is a Boston-area local, and he visited Comicopia several times while I worked there. In addition to being a warm and friendly person, his artwork is just so beautiful, and I love the fact that he illustrates the Lowriders series with only ballpoint pens. Lowriders in Space is the first book in the series, and I finally read it when I was gathering titles for the “Middle Reader Mayhem” installment of the Comics Lockdown series. It follows Lupe Impala, El Chavo Flapjack, and Elirio Malaria as they trick out a new ride to win a car competition to fund their very own garage. They inadvertently rocket into space in their lowrider, decking it out with Mars dust and constellations, and avoiding a black hole with the clever use of white-out. This is the kind of comic kids clamor for, with wild adventure and new ideas. The essay in the back about lowrider culture is one of my favorite parts, as the whole story is a love letter to the drivers who want to ride bajito y suavecito. 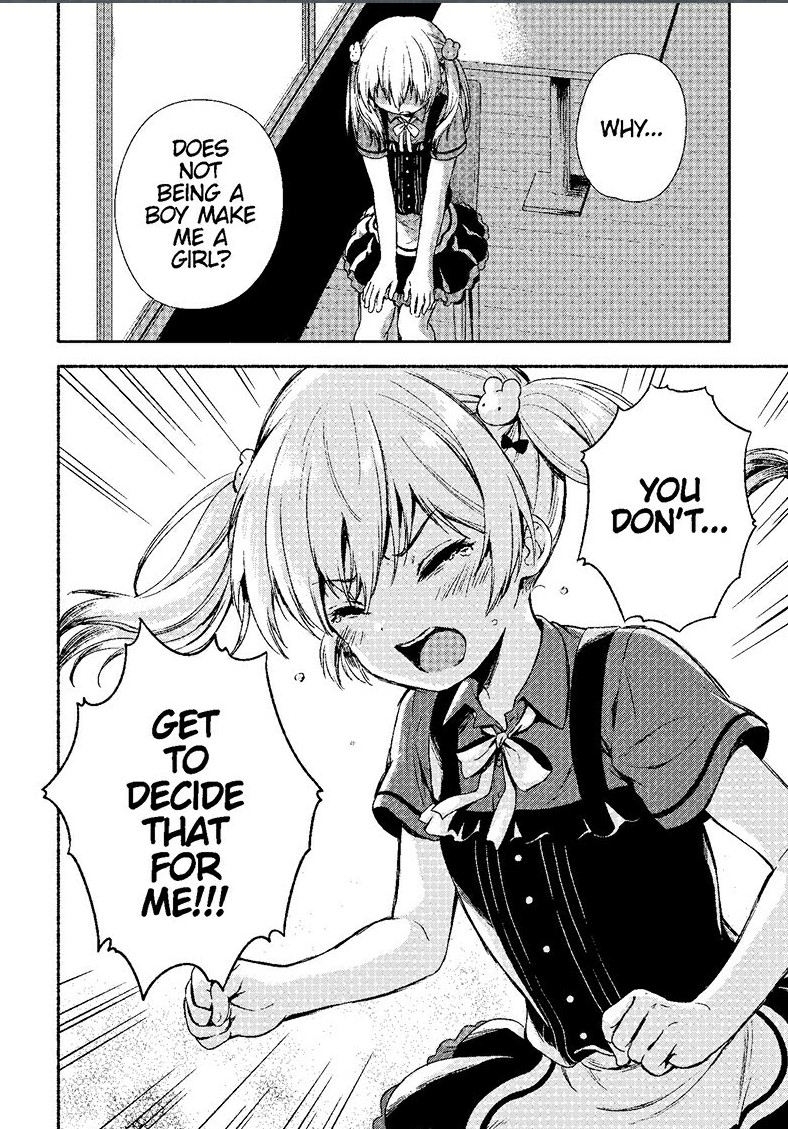 Love Me for Who I Am, Volume 1 — by Kata Konayama, published by Seven Seas Entertainment
I will admit to very nearly skipping this manga over because of the suggestive cover, which I think does not help the manga’s chances. I was actually really impressed by the story, so glad that I got over my biases a little bit to check it out. It revolves around Mogumo, a non-binary high school student who feels as though they are not understood by any of their peers. Their classmate, Tetsu, decides to invite Mogumo to work at his older brother’s maid cafe — a cafe where all the staff are otokonoko, or boys who dress like girls. Upon learning the nature of the cafe, Mogumo insists that they are neither a boy or a girl, that they like wearing girls’ clothes because they feel better on, but that’s not how they identify either. As a result of this declaration, readers are able to learn more about the various identities of the characters at the cafe. It’s a really sweet, non-judgmental exploration of different gender expressions that doesn’t shy away from how difficult it can be to break away from the binary and forge your own path.

BL Metamorphosis, Volume 1 — by Kaori Tsurutani, published by Seven Seas Entertainment
I was so thrilled when I heard that this series had been licensed, and the first installment has only made me more certain that it’s exactly what the North American manga market needs. Ichinoi is a seventy-five-year-old calligraphy teacher who lives alone after the death of her husband. She happens into a bookstore on a whim, and seeing the manga on display, remembers her own youth reading comics. She picks up a manga and loves the artwork on the cover so much that she decides to buy it. While reading, she discovers that it’s a boys’ love manga, something she had never read before — but she’s so invested in the romance! She goes back to the bookstore to get the following volumes, and she ends up befriending the teenage store clerk, Urara, who is also a BL fangirl. I love how the delicate artwork compliments the gentle story of a wholesome friendship borne out of love of a not-so-wholesome genre of manga. As a protagonist, Ichinoi is treated as a whole, complete character, whose everyday difficulties are portrayed with compassion, and whose personhood is well-developed. I’m really eager for the next volume in this series, when Ichinoi and Urara find themselves at a doujinshi event! 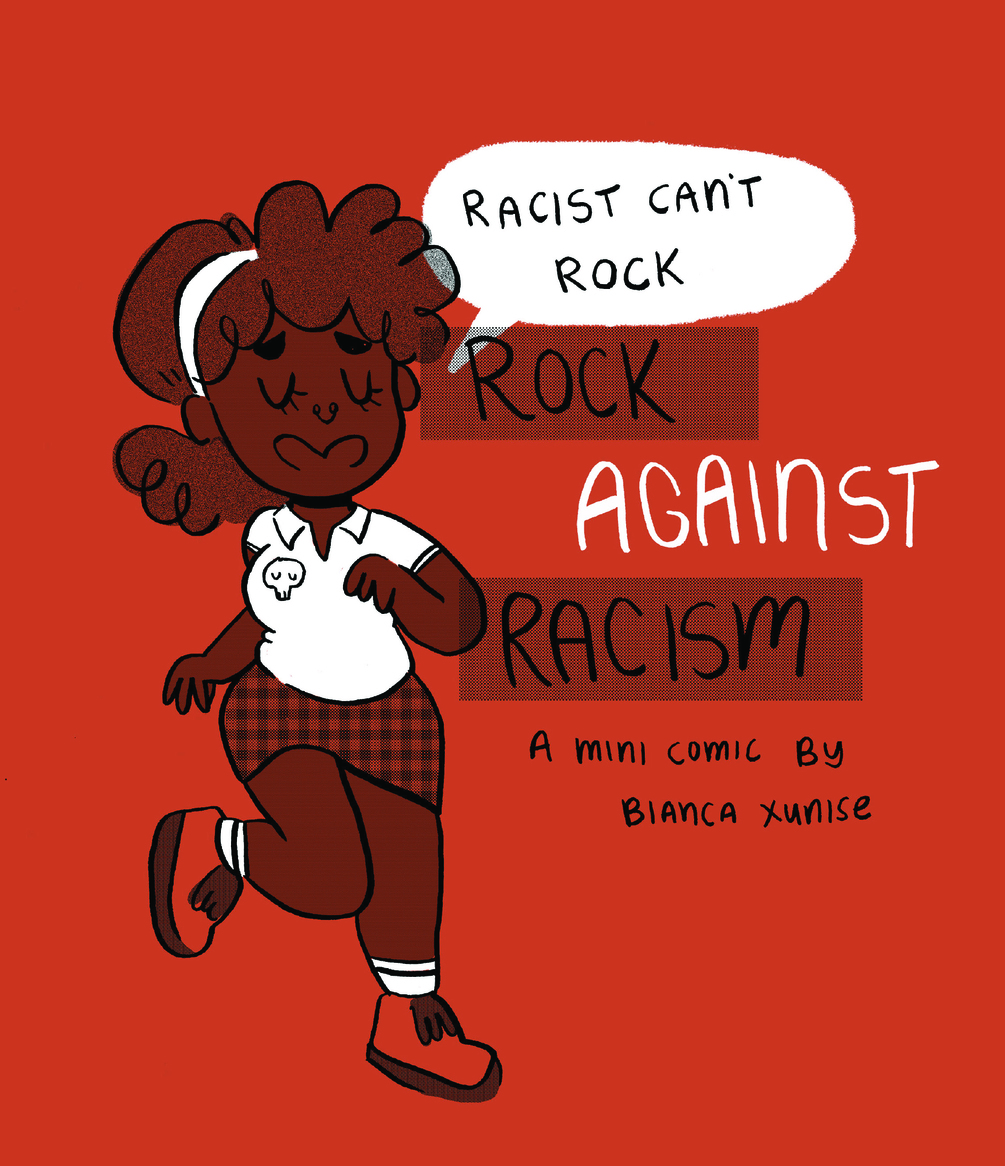 Rock Against Racism — by Bianca Xunise, available on her Gumroad shop
Bianca Xunise will be the first Black comics creator I cover in my Black Creator Spotlight series, but I wanted to take a moment to talk about her zine Rock Against Racism anyway. I really loved all four of the digital mini-comics I bought from her, but this one was a blend of a few of my favorite things: rock music, history, and comics. As much of a history lover as I am, I have to admit that I didn’t know much of anything about the Rock Against Racism movement, and Xunise laid it all out in clear, simple terms for readers in this mini. I’ve long admired how her adorable artwork simultaneously helps to teach and console her readers on issues of racism and sexism, and her knowledge of the alt music scene gives her a unique perspective. 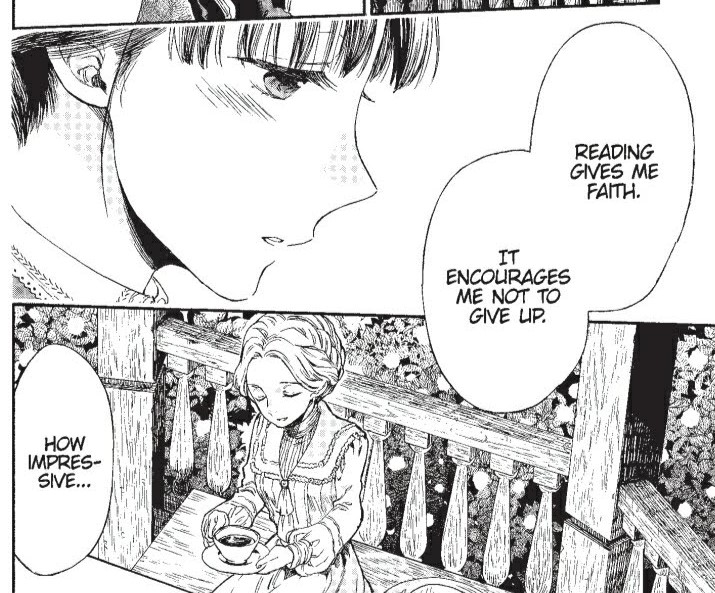 Goodbye, My Rose Garden, Volume 1 — by Dr. Pepperco, published by Seven Seas Entertainment
In the past, I have bemoaned the state of yuri manga. So much of it feels either like it’s pandering to the male gaze, or that it treats lesbianism as a “phase” that one grows out of after middle or high school. So I’ve been really pleased by some recent offerings in the genre. In particular, Goodbye, My Rose Garden speaks directly to my interests in literature, English nobility, and history in general. Hanako is a young Japanese woman who has traveled to England in an attempt to get her novel manuscript published. She is especially interested in having her favorite author, Victor Franks, read it and offer his critique. When she is told in no uncertain terms that Mr. Franks will not see anyone and has not time to read other authors’ work, she is despondent. But a young noblewoman by the name of Alice Douglas notices the entire exchange and, impressed with Hanako’s single-mindedness and ability to speak her mind, offers Hanako a job as her personal maid. Hanako gratefully accepts, and the stage is set for a turn-of-the-century melodrama, in which Hanako tries to help her mistress, who wants nothing more than to die because she is bound by duty to marry a man she does not love. I feel like a broken record every time I say it, but it’s such a relief to have queer romances set anywhere other than a modern high school, and it’s clear that Dr. Pepperco has done their research on the time period. Looking forward to seeing where this one goes! 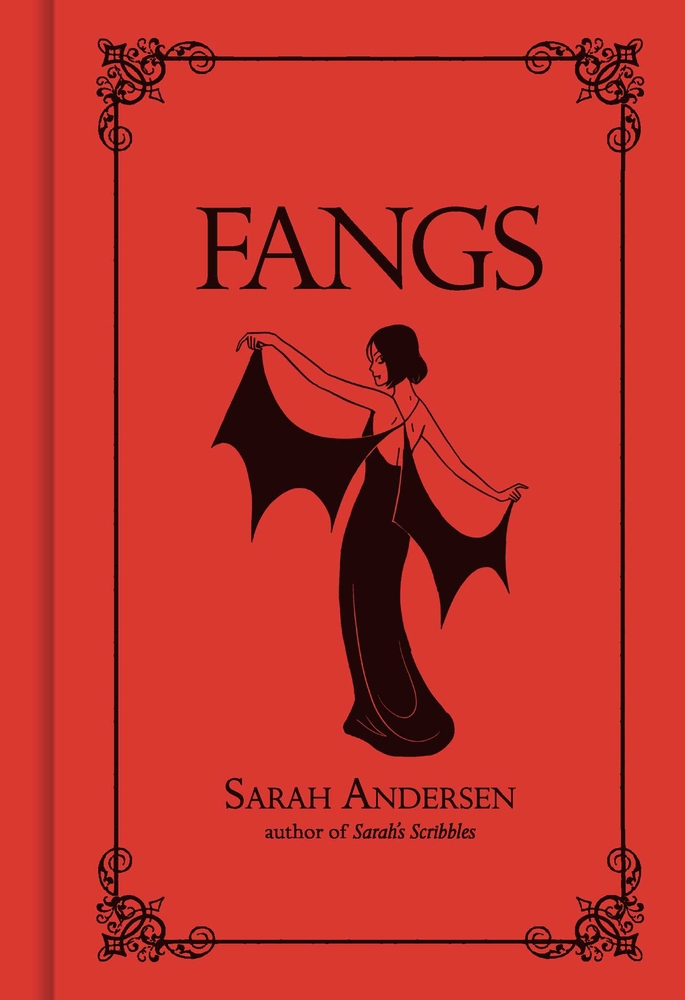 Fangs — by Sarah Andersen, published by Andrews McMeel Publishing (available September 1, 2020)
I think you’d be hard pressed to find anyone who doesn’t recognize Sarah Andersen’s “Sarah Scribbles,” a quasi-autobiographical webcomic chock full of relatable content. Andersen brings her impeccable sense of humor and her appealing artwork to Fangs, which unites Elsie the vampire and Jim the werewolf in a spooky-cute romance. There is a vague time progression, but the story is mostly just vignettes about Elsie and Jim’s day-to-day interactions, learning how to navigate each others’ quirks, just like in any relationship. The catch is that those quirks mean Elsie can’t wear silver jewelry, Jim can’t open the curtains during the day, and no one ever sees Jim’s mysterious new girlfriend. This kind of sweet monster stuff is completely my jam, and I think it definitely has a solid spot amidst the modern fascination with the supernatural. The comics are available on Tapas already, but a physical collection is coming out in September!
Okay, that’s going to do it for May and June. I thought that having a baby would slow my book consumption, but it’s actually increased somehow. I hope to keep up that energy going forward so that I can have lots to recommend each month! Thanks for reading once again, and I hope you all keep an eye out for the Black Creator Spotlight series, starting (hopefully) at the end of this week!

Thank you, @starfruitbooks! The Town of Pigs has arrived safely and will take its place with its buddies on the shelf. :3 🐖🐷

The manga industry is growing, and so are we! We’re looking for some great candidates to help us out with editorial, production, marketing and accounting.

Look what arrived in print early! Our fulfillment partner will need time to process the books and we want to sell them first at @TorontoComics so they'll ship out in late June, as originally planned.

Stray by @thisismollym is available for pre-order now!

The first batch is here!
We will start shipping them now. 2