I have some exciting news to share with everyone today!  Part of my job is to advise fellow comics retailers on which manga they might be interested in stocking in their stores.  Because the demand for this service has gotten so high and is causing me to cross-post in several groups, I’ve decided to create a mailing list!  While it will be geared toward comic shop retailers, certainly anyone who would like to see my monthly thoughts on upcoming titles is welcome to sign up.  I just ask that everyone bear with me as I slowly learn how to use MailChimp to its fullest potential, haha.  The link to sign up is here, and I’ll be posting it in several locations over the course of today so that it reaches everyone who might want it!
In other news, I haven’t written much lately, but I assure you all that I’ve been reading a ton.  I’ve been on a bit of a shojo romcom kick lately; I read seven volumes of Waiting For Spring the other day, and have slowly been working my way through High School Debut.  I’m not sure why, but every now and then I just feel the need to read something sweet and positive, and shojo romances really fill that requirement for me.
My last post was a review of a middle reader graphic novel that isn’t a manga.  This doesn’t mean I’ve abandoned manga (obviously), but I do want to mention that I probably will be doing more non-manga reviews in the future.  I believe that middle reader and young adult graphic novels are among the best (and best-selling) graphic works right now, and I would be remiss if I didn’t mention them, especially as so many of them have been influenced by manga and are being read alongside manga.  Media, after all, does not exist in a bubble.  Works for young audiences are important right now, creating many new readers and strengthening visual literacy.
And that’s all to report right now!  Just some little updates to tide you over until I post again — or until you sign up for my regular emails!

I’m a sucker for friendly ghost stories.  As a kid, I was desperate to meet a ghost, dragging my best friend through her 300+ year-old house with a tape recorder ready to catch some EVP or find cold spots.  I was also raised by my single mother and my tailor grandparents — so Brenna Thummler’s new middle reader graphic novel, Sheets, speaks to me on many levels. 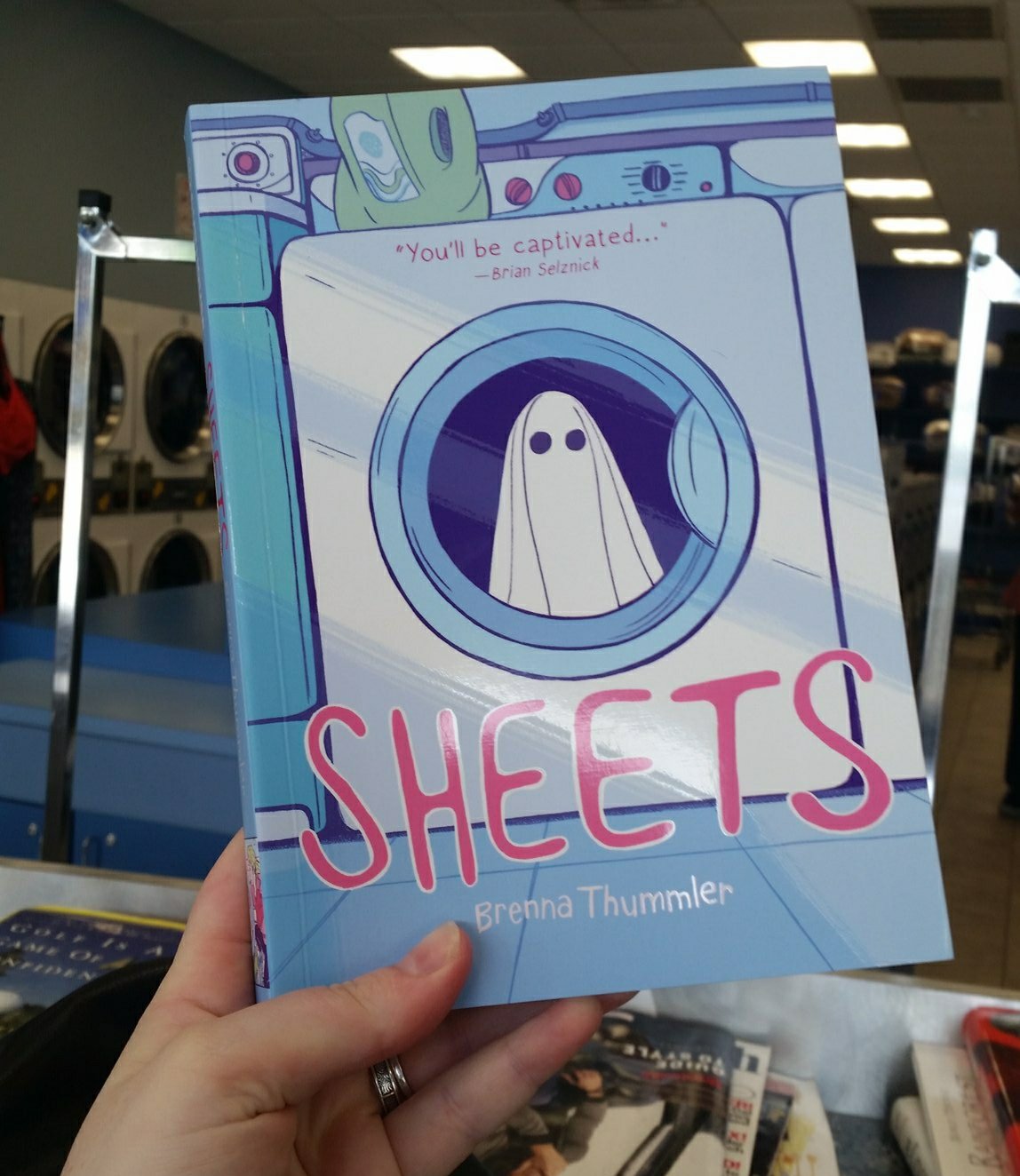 Marjorie Glatt has recently lost her mother, and with her father overwhelmed by grief and depression, she is left to manage the family’s laundromat all on her own.  Between that, her school obligations, her little brother, and their overbearing neighbor Mr. Saubertuck, Marjorie feels overwhelmed and adrift. Similarly adrift, a ghost named Wendell wanders into the Glatt Laundromat after his escape from the Land of Ghosts.  Prone to mischief, Wendell turns the laundromat upside down one night, hardly endearing himself to Marjorie, who very much does not believe in ghosts. But with Mr. Saubertuck putting the pressure on Marjorie to give up her family’s land in order for him to build his new spa, Wendell and his fellow ghosts might be her only hope of keeping the business…afloat.
It is no secret that being a young teen is difficult; the chaos and uncertainty of puberty are exacerbated when a child is thrown into a tragedy like the death of a parent, or a divorce, or a debilitating illness.  But while we try to shield our children from the harm of the world, we cannot prevent every bad thing from occurring. I sometimes hear complaints about media that depict untrustworthy adults, but the reality is that there are plenty of adults — even ones who mean well — who are not always up to the task of making things work so that their children don’t have to suffer.  Sheets portrays that relationship well, with Marjorie’s father very clearly caring about his children only as far as his depression will allow; and those who have ever suffered from depression, whether chronic or episodic, will relate to the empty numbness that Mr. Glatt experiences.
Despite the heavy material, this book is not a downer!  Thummler’s artwork conjures up the wonder of childhood autumns, each page reminiscent of faded photo memories.  The action switched between the real world and the Land of Ghosts with a simple palette shift. The ending is positive without feeling saccharine, as the themes of grief, fantasy, and friendship are all tied together.  A satisfying, engaging read that takes about as long as doing a load of laundry, perfect for the kid whose best friend is a ghost, or who would like some not-too-scary reading material for the Halloween season.
Sheets, by Brenna Thummler, is now available in print from Lion Forge.