I want to start off this post by acknowledging that this week has been a deeply ambivalent one in the comics world. The two-thirds of my Twitter feed that aren’t dedicated to anime memes and cute animals were split with coverage of recent Comicsg*te abuses and coverage of the Toronto Comic Arts Festival — namely, the worst and the best that the comics world has to offer, respectively.
I don’t want to dedicate too much time to discussion of the former issue for various reasons, but not least of all because in light of efforts to push certain people out of comics, I find my desire to uplift the voices of those people becomes stronger. And so, I’m going to have a go at my first official review here, of The Bride Was A Boy, by a woman who goes simply by the name of “Chii.” 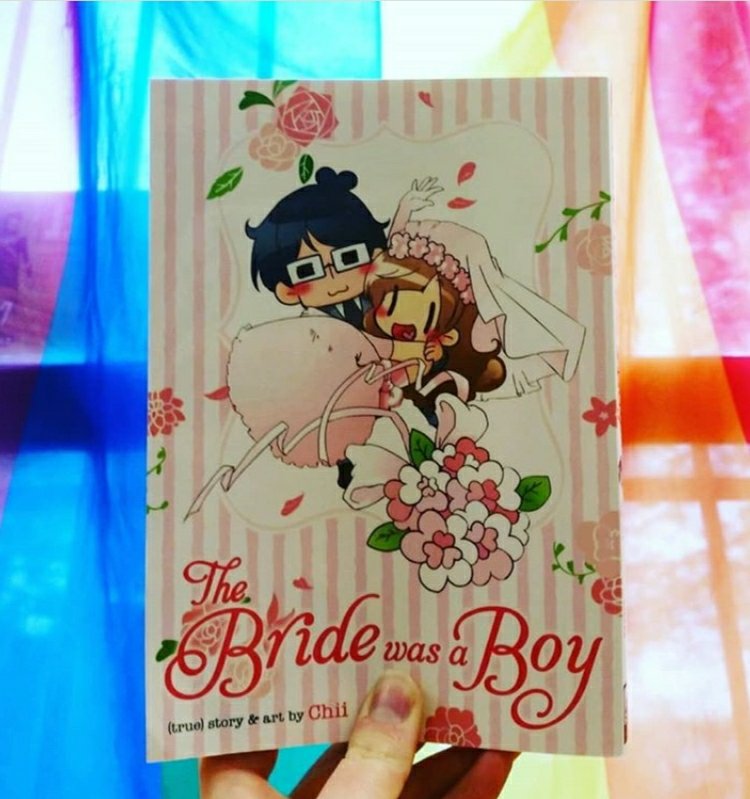 When Seven Seas Entertainment published My Lesbian Experience With Loneliness, they struck gold; I’ve discussed before in various venues the great pull of that book, among manga readers and non-manga readers alike. There was a great need for this — an autobiographical manga about queerness and depression that allowed readers to either relate, or to empathize and find common ground. It was very smart, then, for Seven Seas to pick up The Bride Was A Boy, because I feel that autobiographical trans narratives are even more necessary in many ways.
Though the manga is billed as being about preparation for Chii’s wedding, in reality it is the discussion of Chii’s journey through womanhood, from her discovery of being trans to her decision to go through with sex reassignment surgery and becoming legally “female.” Throughout this journey, she has a great deal of support from her family and her soon-to-be-husband (whom she alternately refers to as “Boyfriend-kun” and “Husband-kun”). Between chapters, Chii takes the time to break down some terms and laws that people outside of the LGBT+ community might not be familiar with. They are simple explanations, but they are a good basic primer for anyone who is just starting their journey into trans issues.
I honestly wasn’t sure if I’d like this manga — not because of the subject matter, but because of its presentation. It’s laid out in 4-koma style, which doesn’t typically appeal to me, and the artwork is simple, adorable chibi-style characters. It hardly seems like it has the same underground, confessional feeling of MLEWL. Though I was excited that a trans story was being published, I worried that it was Seven Seas scrambling to ride the high of MLEWL‘s success without regard for the subject matter itself. I found, however, that I truly loved it.
There has allegedly been some criticism that The Bride Was A Boy is too positive; again, Chii is very lucky to have a very supportive and loving family and partner, which may seem like a distant reality to many trans folks. But I think that a positive, autobiographical trans narrative is very important. It is not the job of trans people to constantly struggle for the benefit (and entertainment) of others. Presenting trans womanhood in this way offers it very simply as just another kind of lived reality. It is my fondest wish that cisgender people will pick up this book and maybe come to learn new things about trans people, or come to understand the feelings of trans people better. And I also hope that readers then continue to demand more trans stories, both fictional and non-fictional, that are earnest, entertaining, and which ultimately help to cultivate a culture of empathy. (For this reason, I’m particularly fond of the intermittent breakdowns of terminology and law, and want to acknowledge Beni Axia Conrad for the extra work they must have done to translate these pieces to reflect both Japanese society and relate them to what English-speaking readers might expect in their own societies.)
I’m idealistic, I know. The comics community has more excellent content from queer creators, creators of color, and women creators than ever before, yet we’re seeing an incredible amount of backlash from the unhappy few who continue to do harm, verbally or otherwise, to those already marginalized. I spent much of this week feeling helpless in light of that reality. But reading The Bride Was A Boy reminded me that it has always been my philosophy to use my relative privilege, and my position as someone who reads and recommends comics professionally, to keep people engaged with good work from deserving creators. There will always be people who stand obstinately in the path of progress and understanding, who want their position on the top of the heap to remain unchallenged. But the fact remains that, for many, comics have always been about challenging the status quo, about saying things that the privileged don’t want to hear. It is my hope that comics continue to shake things up and push that status quo even further into oblivion.
With all that said, I happily recommend The Bride Was A Boy to people of all genders as a warm, joyous, informative story about one woman’s journey to manifesting her best life. I would like to see it getting just as much lip service as My Lesbian Experience With Loneliness. May these manga pave the way for the translation of more excellent queer stories!

3 thoughts on “The Bride Was A Boy, and Empathy Through Comics”