I have mentioned in the past that I am astounded by how available anime is now, compared to when I was a young teen and becoming really invested in it as a medium. One of the more shocking aspects of that availability is seeing anime films in movie theatres.
Last Wednesday, I had the distinct pleasure of seeing Pom Poko at a cinema around the corner from work. It’s a film I had seen before, and one of my favorite non-Miyazaki-directed Ghibli films. What could be better than a hopeless meditation on the dangers of overpopulation and humanity’s fraught relationship with nature, punctuated by adorable tanuki antics and a spooky yokai parade? It’s truly lovely — but also, I would think that it would have a remarkably narrow fanbase in North America, being both very culturally Japanese and also rather old at this point. I’m pleased to report that the theatre was very full, and on a Wednesday night, no less!
Pom Poko is only the most recent anime film I’ve seen in theatres, though the others have been more recent releases: A Silent Voice and your name come to mind first…oh, and Yu-Gi-Oh! The Dark Side of Dimensions, but I actually had to leave the city to find a theatre playing that one! And though I don’t get out to the movies often, I have been making a conscious effort to make sure I do go see these, because I want the companies that show them to know that there is a very willing paying audience out there to support these efforts.
With the exception of monumental properties like Pokemon, I never thought anime movies were deemed viable for theatrical releases in North America. And truly, at one time they weren’t. I remember so desperately wanting to see the Cowboy Bebop film, Knockin’ On Heaven’s Door, when it came out only to discover that there was no way any theatres around me would be showing an R-rated cartoon to the general masses. (And even if they had, I was probably too young to go see it…though I suspect my mother would have come along. She always did rather like Spike….) Certainly there have always been small local art house theatres playing all manner of foreign films, anime included. But I just saw Pom Poko at a Regal Cinemas! I saw A Silent Voice at an AMC!
Perhaps this is the era that Spirited Away‘s success has ushered in; perhaps it is merely that those of us who grew up with anime are making business decisions now. Whatever it is, I’m surely grateful that I can go to a movie theatre and see masterpieces from the last 30 or so years, as well as modern hits. And you can bet I’m going to be looking to get tickets for Sailor Moon The Movie S in the next couple months! 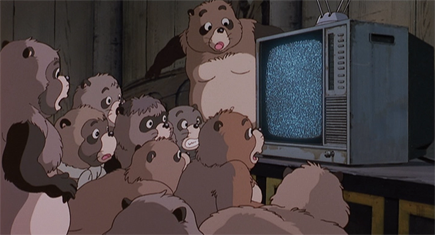